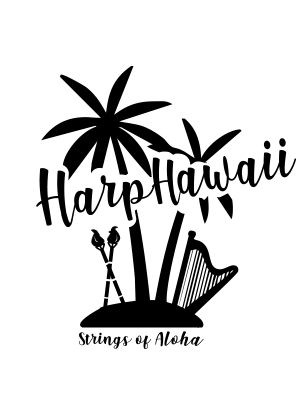 While learning how to stand as a baby, Pumehana Davis would crawl up the base of the harp while her sister, Momi, was practicing, getting a few bass strings in too. When Momi decided to move out of the house, Mom asked,”Want to learn the harp? It’s going to go unless you want to take lessons.” “Yes, yes, yes.” Already starting out on the piano for 4 years, Pumehana, progressed to eight years of private harp instruction. In her teens she performed symphonic work on O’ahu and Maui. Over time, Pumehana was able to expand her repertoire to include many different genres; Classical, Hawaiian, Love Ballads, Movie Themes, Jazz, Standards, Broadway, Classic Rock, a little of this and a little of that.

As for restaurants & hotels, Pumehana has performed at Hotel Hana Maui (1982), Roy’s Restaurant Hawaii Kai (1989-1990), Sheraton Moana Surfrider’s Banyan Veranda’s breakfast as the headliner (Oct.1990-Dec 1998), Sheraton Waikiki’s Hanohano Room’s roster (1998-2003). As for Department/ Speciality stores like Liberty House/Macy’s West (since 1990), the Levian™ Jewelry Collection (since 1990), Tiffany & Co., Inc. for special events (since 1995) and the opening for Christian Dior Ala Moana. As for cocktail, dinner & convention events, Pumehana’s highlight performances for Donald Trump, HRH Princess Sayako of Japan, Japan Airlines, Daimler Mercedes – Chrysler, Motorola, Merrill Lynch, Sony & Rehab Hospital of Hawaii (to name a few). Over the years she has performed for thousands of weddings on O’ahu and VIP events and has even traveled to Provence, France for a wedding.

Performing the harp for weddings and private events for over 35 years mostly on the island of O’ahu. Although classically trained, I love contemporary over classical repertoire. Mostly, I am hired for harp solo.

The harp is wonderfully complimented by other instruments such as the flute, the saxophone or the violin. i book by contract. I have a splendid admin team that helps the me every step of the way so that i can do what I do best.

I hope you consider booking live harp music for your upcoming event. Please contact us for rates and availability. Sharing the Energetic Art of All Music. Thank you and Happy Planning ; )
~Pumehana

Go Back Home
Scroll to top